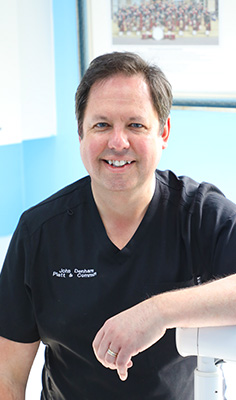 John is a partner and co-owner of Platt & Common along with his wife Jennifer.

After graduating, he then spent his formative years in Clydebank and the Hillfoots practices of Alva and Tillicoultry before joining Platt & Common in 1999.

John father’s family is originally from Bannockburn and so he spent many a childhood holiday in Stirling and the surrounding area. He was an associate at the practice until the sad death of owner Douglas Herd in 2010. Following the purchase of the practice John and Jennifer invested in a programme of improvements that saw an increase in the number of surgeries, dentists and staff as well as new decontamination facilities and a dental laboratory.

John is committed to the training of new graduate dentists in general practice and has been employed by National Education for Scotland since 2009. Over ten new graduates have been mentored here at Platt & Common. He is currently studying part time at the University of Edinburgh for a Masters in Restorative Dentistry and he hopes that all of his patients will benefit from the extra skills that he is developing over this three-year course.

John has a keen interest in all forms of oral surgery and root canal treatment, however, his main focus is to maintain the high standards of patient care at Platt & Common and ensuring that the practice continues to grow and develop.

When not at work, family is very important to him, as well as his two dogs. 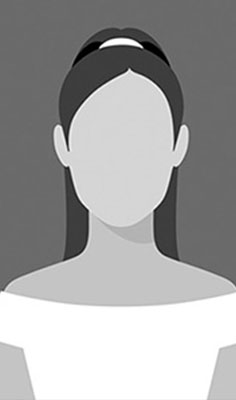 Jennifer is a partner and co-owner of Platt & Common alongside her husband John.

After graduating in 1996 she worked in Falkirk and then Bannockburn before joining Platt & Common in 2000.

Following the 2011 purchase and expansion of the practice she now concentrates on the financial, business and management side of things, leaving John to the building and equipment maintenance.

We have a large staff at the practice and Jennifer’s role as practice manager is central to the success of the business, from purchasing of equipment and materials, to the delivery of high-quality care to all our patients.

Outside of the practice Jennifer spends her time with her family and beloved dogs. 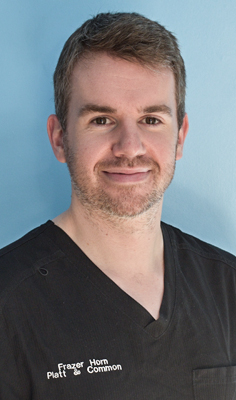 Frazer graduated from the University of Glasgow in 2011 and after successfully completing his Vocational Training year became a full-time associate at the practice in 2012.

Frazer has a keen interest in restorative dentistry and particularly enjoys treating aesthetic crown and bridge cases. He is involved in all areas of general dentistry and actively promotes the prevention of disease and conservative treatments.

Outside the practice Frazer lives in Glasgow with his family. He is a keen runner and regularly participates in organised charity runs. 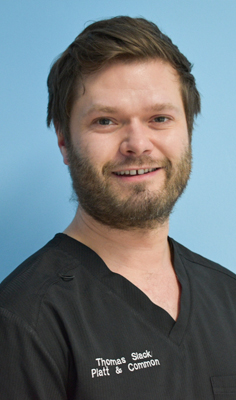 Tom started at Platt and Common in November 2019 having worked for the previous seven years at Alva Dental Practice where he was both lead clinician and a vocational trainer.

He is originally from Cumbria and after graduation completed his Membership to the Royal College of Physicians and Surgeons of Glasgow (MFDS) in 2011. Following postgraduate training in a general practice in Ayrshire he spent time in oral surgery at Glasgow Dental Hospital and special care and paediatrics at the Royal Alexandra Hospital in Paisley.

He enjoys all aspects of general dentistry and has undertaken courses in the restoration of implants, aesthetic bonding (conservative white fillings) and “Short Term Orthodontics” (cosmetic braces). He offers all these at the practice as well as general NHS and private treatments in a relaxed and friendly manner.

Outside of work he enjoys music, film and art, cooking and baking, skiing and hill walking. He recently volunteered with the charity Smileawi which provides dental care across Malawi in 2019 and has previously done volunteer work with Health-Point Foundation, a charity providing dental care to refugee camps across Europe. 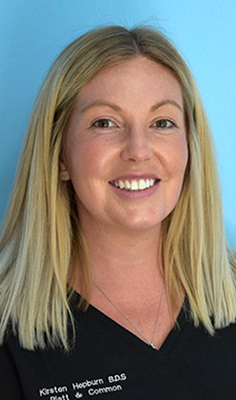 After completing her vocational training year in Grangemouth, Kirsten worked as an associate there for the next seven years before joining Platt & Common in 2020.

She has a keen interest in both facial aesthetics and orthodontics. She has also completed courses in Quick Straight Teeth – a clear and discreet brace system used to straighten the upper and lower front teeth.

When not at work she can be found spending time with her young family and Weimaraner, whilst cooking and baking. 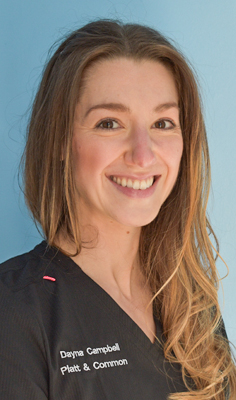 Dayna will be starting at Platt & Common in April 2022.

Following graduating from the University of Glasgow in 2012 Dayna completed vocational training in Falkirk and has been based there until 2022 when she joined the team at Platt & Common.

She has recently completed the Invisalign course, providing discrete short term braces and is qualified in facial aesthetics. Dayna enjoys restorative dental treatments yet strives to be as conservative as possible.

Outwith the practice you can find Dayna relaxing with yoga, strolling up some hills or lost in a good book. 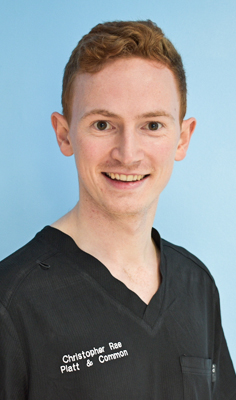 Chris joined the practice during lockdown in 2020 and is a graduate of Newcastle University Dental School. He is interested in all aspects of general dentistry and places a firm emphasis on patient education, prevention and minimally invasive dentistry. Chris has a keen interest in oral surgery and paediatric dentistry.

Outside of dentistry, Chris enjoys all sports and is a keen football and rugby player. He also loves exploring the Scottish Highlands, travelling and socialising with friends. Chris enjoys tasting new and exciting foods, and trying out new recipes.

This website uses cookies to improve your experience while you navigate through the website. Out of these cookies, the cookies that are categorized as necessary are stored on your browser as they are essential for the working of basic functionalities of the website. We also use third-party cookies that help us analyze and understand how you use this website. These cookies will be stored in your browser only with your consent. You also have the option to opt-out of these cookies. But opting out of some of these cookies may have an effect on your browsing experience.
Necessary Always Enabled
Necessary cookies are absolutely essential for the website to function properly. This category only includes cookies that ensures basic functionalities and security features of the website. These cookies do not store any personal information.
Non-necessary
Any cookies that may not be particularly necessary for the website to function and is used specifically to collect user personal data via analytics, ads, other embedded contents are termed as non-necessary cookies. It is mandatory to procure user consent prior to running these cookies on your website.
SAVE & ACCEPT